Over the past few weeks I’ve written several articles about member based associations using social media. I thought today’s post would be a good time to reflect on a case study that I personally have been working on over the past year. I serve on the board of the Triangle Chapter of the American Marketing Association (AMA) as the Vice President, Newsletter.

Getting started can be difficult with new technology. As a group we knew we wanted to start a blog, but what do we post on it? My responsibilities as the newsletter editor required writing, editing and laying out the monthly HTML email newsletter. This proved to be the best starting point to put content on the blog.

Blogger was chosen as the blog platform for its ease of use and quick ramp up time. I knew that getting a WordPress blog would be nicer in terms of features but would take more time to get built. Blogger allowed for a quick and easy deployment. The page was modified to include the AMA logo, chapter description and link to the web site.

The site is located at http://triangleama.blogspot.com and includes meeting reviews, photos and interviews from socials, video and multimedia embeds of presentations and podcasts. Additional links to other social media sites and RSS feeds have been added to the layout. Since launching in December of 2008 the site has recorded over 920 unique visitors and 2,440 page views.

Once the blog was set up Twitter was the next obvious choice. Twitter’s simple messaging allows the chapter to communicate upcoming meetings, chapter announcements, blog posts, podcasts, and links. Triangle AMA’s Twitter account @triangleama quickly built a strong following of members and other marketing professionals in our geographic area and over 565 followers.

Triangle AMA’s LinkedIn Group was created in November 2008 and quickly started having members request to join. One of the challenges in creating and launching the group was deciding if the group would be restricted to dues paying members. The decision was made to allow non members to join the group as long as they were marketing professionals based in central and eastern North Carolina. It is important to monitor groups on LinkedIn as we had some people join that were spamming or only interested in selling to our members. This also created the need to write some guidelines for discussions to alert groups members of the purpose of the group and put policy in place. Currently the group has over 575 members and displays content via the chapter’s Twitter, YouTube and blog RSS feeds.

You Tube was selected out of a need to broadcast a phone interview of an upcoming speaker. The audio was matched to simple slide animation with the speaker’s photo, title and company logo as well as a call to action slide with chapter web site URL. The Triangle AMA YouTube channel was set up using some of the materials already developed for Twitter and Blogger. Two original podcast have been created for chapter events with more planned for the upcoming year. Another featured that YouTube offered was to add video clips used during speaker presentations as favorites. These clips have also been embedded in blog posts recapping chapter speaker events. The Triangle AMA YouTube channel has over 420 channel views and 92 videos watched.

Selecting a photo site proved out to be more difficult than expected. One of the hurdles was to create an account that multiple users could login to upload photos and did not have bandwidth restrictions. After some initial testing of Flickr, Slide and Picasa, Slide was chosen. Over a dozen photo albums of for monthly meetings, socials and the 2008 holiday party are viewable. Photo and slideshows are embedded in blog posts for respective events.

Other sites currently under development for Triangle AMA include SlideShare for sharing presentations and creating a portal. The portal would include all chapter content as well as content from AMA Nationals, members, sponsors and other sources.

I want to note that several people were responsible for making this happen for Triangle AMA over the past year. Committee volunteers, board members, guests and members have all participated at various levels including being interviewed by me during socials. 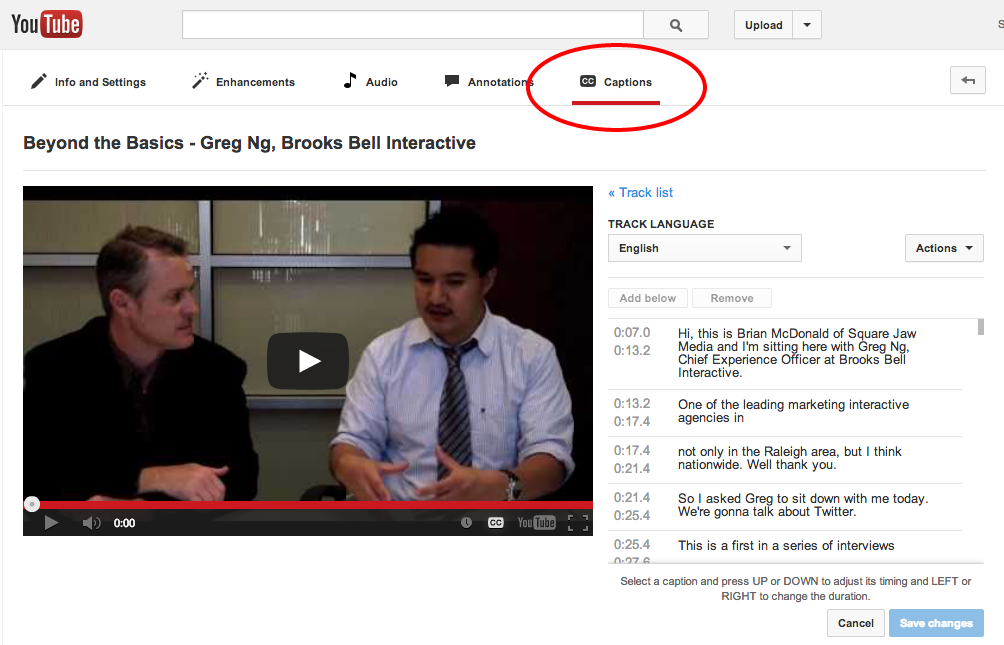 YouTube added automatic captions this year and it’s an important feature for several reasons.  If you’re not familiar with video captions, it is basically the transcript of the video dialog or narration shown at the Read more…