Creating a Buzz on a Budget

Today was the first full day at the Assoc of Chamber of Commerce Executives (ACCE) Convention at the Raleigh Convention Center. I was able to attend some great presentations on communication planning and social media that I’m going to write on in posts next week. I found that doing a tradeshow throws a kink in my challenge for a few reasons. First I was using my laptop to take notes on the speakers. After the morning sessions, the exhibits opened and I had to use my laptop to run the demo on the large monitor in our booth. Also between networking, demoing and returning calls I did not find the time to really sit down and write.

However I was able to see the reaction to my show giveaway and a clever promotion that I pulled together for Site Dynamics at ACCE. I had a small budget of under $400 to work with but needed to get a quantity of 1,000 items to put in the attendees show bags (approx 750) with some left over to giveaway at the booth. After searching the web for swag ideas I suddenly thought of doing a guitar pick with logo, web site and some slogan. I found out that it fit my budget and knew that it would be unique.

So I designed the pick below using an online tool that allowed me to upload my artwork and type set my slogan. I had a few days to get it done during the week of July 4th and have it shipped to the fulfillment house. There were a few glitches including shipping getting lost for a day but I got them there in time to be included in the show packages. 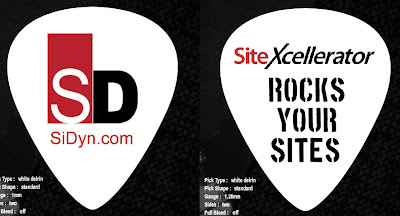 Now I know many exhibitors put a flyer to postcard or may a coupon or brochure but today I was assured by many booth visitors that the guitar pick was unusual and different in a good way. Many people commented that they either played or someone they knew played. But most important they remembered our name, stopped by the booth and saw a demo and entered into our giveaway drawing.

So I have a small 10 by 10 foot booth, table top display and demo station. Not very exciting so in order to tie in the pick I created a tabletop display showing our giveaway as the new Beatles Rockband video game. I also connected my iPod to the demo monitor that has speakers and cranked up Beatles tunes. Needless to say it worked. From a creative standpoint I was really happy since I met the challenge of budget and created a buzz in the space of the show that had results. I also used Twitter to promote using the conference hash tag #acce. 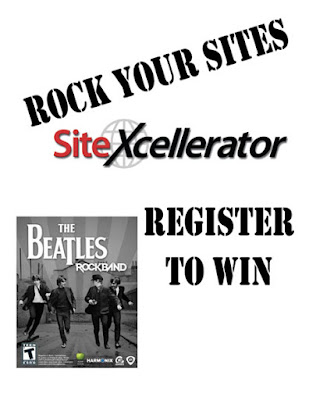