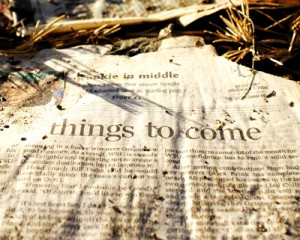 Last year I wrote a blog post about why I stopped subscribing to the daily newspaper. Only a year of time has passed but it seems like 5 years have passed since then. In my post I asked “now what?” Well in that time I’ve found that the answer to that is Twitter.

I frequent Twitter more often than Facebook or LinkedIn on a daily basis for a few reasons. The first being that it’s easy to scan Twitter streams, much like newspaper headlines. I’m a big scanner and I tend to search for keywords that spark my interest. Of course the downside to this is I sometimes miss information but so does everyone else. But for the most part I click through to articles of interest to read and sometimes share.

Second is the ability to group content using Twitter lists. I group my lists much like the sections of the paper: local news, sports, entertainment and national news feeds. I also have a group of approximately 200 local people that I follow on a regular basis. Once you get over 150+ friends it’s too much data to track on the main feed. Segmentation is key. And I’m a local news junkie in that I’m more interested in what’s going on in my area and the local people making news. Twitter allows me to keep abreast of what’s happening in my community.

Third is that Twitter is real time. Gone are the days of getting yesterday’s news in today’s paper and catching a 20 minute recap of national nightly news. I do miss CNN Headline News when they did the 20 minute recap all day long. Now CNN is like a bad cable reality show of people trying to make news interesting. Just the facts please, no need to entertain me I want to be informed. If the story is big it will be retweeted to death and that gets my attention even if I’m offline for a period of time.

Now I would only be telling part of the story if I did not state that some of the Twitter feeds that I follow are newspapers and news organizations. As these media companies have started using social media sites, it allows us as consumers to continue our relationship with the media outlets that we’ve known and trusted for so many years.

I also want to point out like I did in my post last year that part of me feels empty with newspapers dying. For one I know that many journalists and newspaper staff do it for their love of reporting, writing and publishing. Newspapers were never the wealthy choice of communication professionals. So to those that have seen their industry shrink yet still work hard to be their reader’s advocates and report the facts you have my greatest respect.

Do you still subscribe to the daily newspaper? If not how do you get your news and information?