Does a Generation Own Behavior?

This week I took the Pew Research Center Millennial Quiz.  After seeing several friends post their scores on Twitter I gave it a try.  My score was 61 out of 100 and placed me between Gen X and Gen Y or Millennials as they are now called.  The higher the score the more I have in common with members of the Millennial generation. 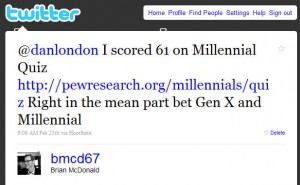 I’ve always thought and stated that I’m not a huge fan of quizzes that try and classify me into a certain demographic category.  My background is unique for several reasons:

I know many people did not move around as much as I did nor have the opportunity to live abroad.  These circumstances gave me a very unique view of the world and my own culture.  The experience taught me to learn how to adopt quickly and embrace change.

At the same time having older brothers and sisters at the tail end of the boomer generation gave me common ground with the boomers.  I inherited all of their Beatles, Pink Floyd, and Led Zeppelin 8-tracks.  Most Millennials don’t know what an 8-track is but they know the artists.  Yet when I was a teenager I was heavy into New Wave, Punk and Metal as it was the music of my generation.  Also I was born right at the beginning of Gen X so there is some spillover from the previous generation’s influences.

So why do marketing professionals want to categorize us and put us into a generation?  Because it makes it easier to target specific groups of customers and develop a strategy for the group.  For every one of me there are at least five others that did not have the varied experience I did.  They lived in the same town growing up.  They did not move overseas and have to learn a different language.  Their grandparents would listen to Glen Miller and Swing music, not their dad.

Today we want to market our products and services to the largest group of potential customers.  Millennials are one of those groups.  But do they own these characteristics like having just a cell phone and not a landline?  Not really.  Making decisions about your consumer choices are unique and based on your needs.  I decided to get rid of my landline phone because I never used, not to be more Millennial.

What do you think about generational grouping?  Do you feel that you fit solidly in a generation or have ties to more than one?