Watching the news and tracking the storm that tore through North Carolina yesterday reminded me about the tornado that hit Raleigh in 1988. I was in college at NC State and living off Hillsborogh St. I still recall the strange weather that day. The temperature shifted 20+ degrees and by midnight you could see storms to the north. I recall sitting on the front porch ad talking with my roommate about how weird the weather had been and how it was, “perfect tornado weather.”

That storm spawned several tornados and hit several neighborhoods in North Raleigh starting at midnight. It flattened the K-Mart on Glenwood Ave and scarred the land around Lynn and Leesville Roads. The people in those neighborhoods had very little warning and surprisingly there were few fatalities (4 total and 2 in Raleigh). I was not aware of the storms until the next morning. One of my roommates had driven back from his home in Northern Virginia for Fall Break and asked me what happened in North Raleigh. “It looked like a bomb went off out there!” he said. My only news sources at that time were television and the copy of The News and Observer that was sitting on the coffee table.

Yesterday we saw the worst tornado activity in the history of the state. After returning from my kid’s soccer games around 3:20 pm I turned on WRAL to see how the storm was tracking. Within the next five minutes they had identified a tornado in Holly Springs that was heading directly towards our location. Luckily my house has a basement and we all went there to be safe. Over the next 10 minutes, heavy wind, rain and hail hit our home and area. We were spared as the tornado that was heading toward us went more due south and directly towards Raleigh.

About 10 minutes later I saw the first image of the damage. I was checking Twitter to see what news was coming out and saw the image of the Lowe’s in Sanford flattened like the K-Mart on Glenwood 23 years ago. A few hours later I saw images of a friend’s home that was badly damage by the storm and called to make sure he was OK both physically and emotionally. He informed me that although he was a bit shaken, everyone was OK and nobody was injured. 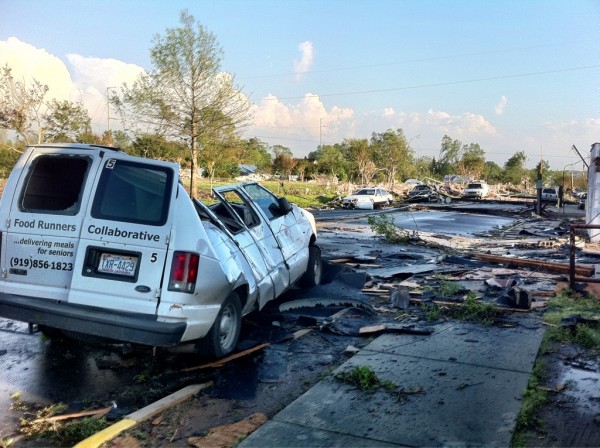 S. Saunders St. after the tornado

What resonated with me was even more relevant than it was 23 years ago, tornados and other acts of nature can destroy our homes, cars and other possessions but they are all replaceable. What really matters is our safety and mortality. When that tornado hit years ago I felt bad for those that had damage and lost their lives but did not fully understand the impact. Yesterday I felt very sad and bad for those suffering from this storm. Being homeless for any period of time sucks. I have been forced to leave my home for several weeks due to a house fire and can tell you I hated every minute of it. The safety of my family was more important to me than anything else at that moment.

I am thankful for the more immediate access to information we now have with increased communication channels and real time technology. This information helps saves lives and move people out of danger when seconds count. We spend an inordinate amount of time on Facebook, Twitter and other social networks yapping about our coffee, lunch, or whatever. Yesterday was an opportunity for people to inform, warn, reflect and share their emotions, grief and impressions of what happened to our community.

What’s really important is surviving, helping our neighbors, sharing our love and passions with those in our community. My family and I were very lucky that this storm passed by us with no damage. While others are dealing with major challenges in their lives caused by the storm, I have faith in the fact that they too will survive and continue onward. Homes will be rebuilt, possessions replaced and injuries will heal.

If you are interested in helping those in the community contact the Triangle Area Chapter of the American Red Cross at http://www.triangleredcross.org/. 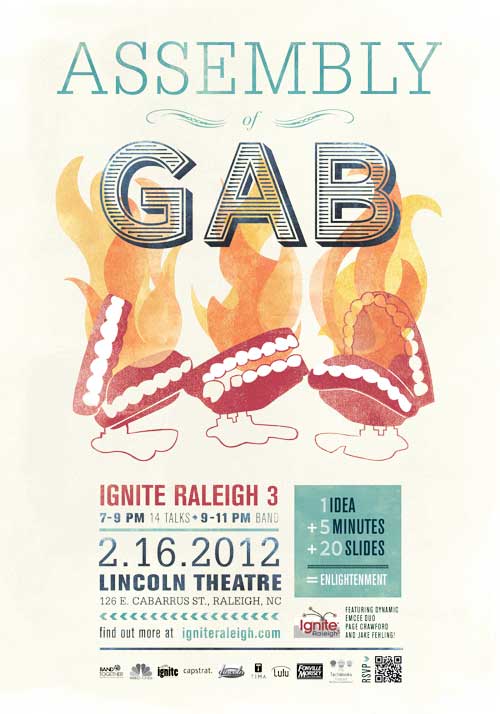 11 Things You Should Know About Raleigh | Ignite Raleigh 3

Last time I did Ignite Raleigh I have to admit I was more nervous than I was this time around.  There is no doubt that practice makes perfect and it helps your confidence when you Read more… 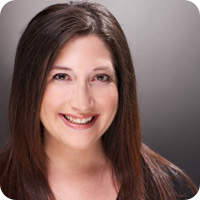 Trends from Randi Zuckerberg, Former Director of Marketing at Facebook

Last month I had the opportunity to meet and hear Randi Zuckerberg speak at Meredith College. Randi was visiting the campus to receive the President’s Award and deliver the 2012 Woman of Achievement Lecture. Prior Read more…

This past Sunday evening I was able to sit in on with The TechMonks Podcast and recap the Triangle AMA Digital Marketing Camp.  The show hosts Damond Nollan @damondnollan and Tim Arthur @timarthurattended the event Read more…