How Important is Your Online Brand Reputation?

SEO Meetup had another great meeting last night at Media Two on Your Brand Presence & Managing it Online.  Phil Buckley @1918 and Morgan Siem @morgansiem presented some timely and relevant examples on the topic.  Phil began with the concept of that with y 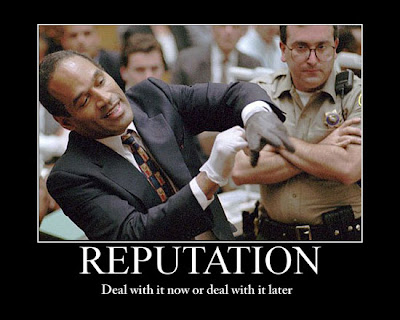 The overall strategy revolves around owning and managing your brand versus ignoring it or refusing to admit it exists.  We’ve all heard people say, “I don’t do Twitter, I don’t get it, too much junk.” True there is mindless banter on social networks but that does not mean there is not value in the conversations as well.  I equate it to any media consumption by the public whether it’s art, music, film, food, etc.  There is always junk out there but we use technology, tools and communication to cut through that to get to what we desire most.

Therefore you don’t want to be invisible or portrayed incorrectly because you did not want to join the conversation.  Owning your brand and name online is just as important as it was before the web when you fought for customers’ attention via print, radio, TV advertising and PR.  The challenges are still the same but the method and channels have changed.  In the case of reputation management we still have to deal with crisis communication but have found that social networks can be a powerful tool to react faster and deal with groups or individuals with more relevant information versus the entire customer base with a single message.

Morgan demonstrated how to measure brand impact and determine who is in the conversation with a demonstration of Radian 6 analytics software.  Her presentation used the recent Pit BBQ Tweetup as the data source.  By analyzing the online conversations she was able to determine how the event was perceived by both attendees as well as others.  One of the strategies Morgan demonstrated was to determine who the key influencers are during a campaign.  This allows you to drill down to a specific traffic stream to determine impact and sentiment.  Based on that information you have the ability to engage stakeholders, influencers or customers directly and with targeted message.

Other tools discussed included Filtrbox, Techrigy, and Trackur.  With the explosion of social networks, tools and integration, monitoring and research applications will continue to evolve and scan more data.  Of course there is also the big player in the search market, Google who recently launched some new features in Google Analytics that I’m preparing to dive deeper into on my own sites.  The end result of the growth of these companies will mean more choices and better pricing models to meet your needs.  Whether you’re a large advertising agency in NYC or a one man consulting practice in Wake County!

If you have not attended the SEO Meetup I encourage you to check out their site at http://www.meetup.com/RaleighSEO/.  The group is a good mix of marketing, PR, developers, web designers, business professionals, entrepreneurs, etc.  Plus they have handouts to allow you to focus on the discussion versus having to capture the basic stuff by writing notes.  Great job Phil and Morgan!