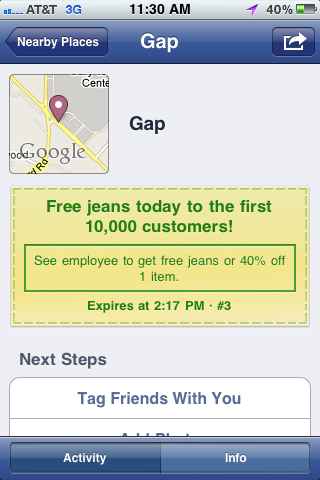 Last week The Gap announced that they were giving away 10,000 pairs of jeans to anyone who checked in to their stores on Facebook.  All you had to do was show your check-in screen on your mobile device to redeem the coupon.  I headed over to The Gap at 11 AM last Friday to see if I could be one of the lucky 10,000.  I was unable to be there when the store opened as I was co-hosting the Movember-thon from 10-11 AM.  By the time I got to the store they had already given out the free jeans. In fact, the store clerk informed me that there was a line at the door when the store opened at 10 AM and they only have 7 pairs of free jeans to give away.

Was I disappointed? No, because at the same time The Gap was offering 40% off any regular price item for anyone showing their check in screen.  Since I was at the store and needed a pair of jeans I decided to try some on.  Now I’m not a fashionista, so I usually buy Levis jeans and my last purchase was at BJ’s Wholesale Club.  Therefore I would not normally spend $50 on jeans, but with the 40% off the jeans were more around $33 which is  what I’m willing to pay.  Big win for The Gap, they got me in the store and I made a purchasing decision that I would not have normally done.  Also my wife went with me and bought an item at 40% off as well as showed me a second item that she liked that I plan to go back and purchase.  To top it off the store clerk gave me coupons valid on Wednesdays and Thursdays, low traffic days.

So even though I and many others wrote about The Gap changing their logo and how the decision seemed ill advised, I am more convinced than ever that it was all a stunt.  I cannot believe that The Gap was going to change their logo to something that looked like a 5th grader’s first forway into layout software.  Either way it does not really matter as this week’s discussion is about how brilliant the free jeans campaign was.  Not only did they redeem themselves among marketing pundits and regular customers, they also accomplished something that the Facebook executives are loving.  They demonstrated how to use the Facebook Places mobile application work for location based marketing. 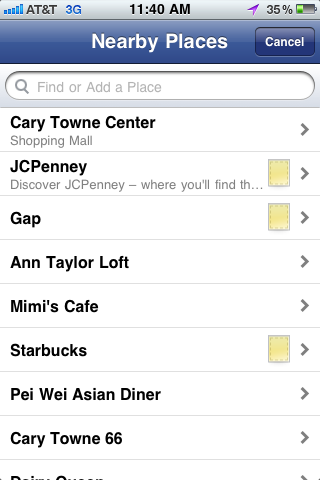 When I checked into Facebook places I noticed that the screen looked different.  Luckily I downloaded the latest update earlier in the week so I could see the coupons icon next to the store name.  As I walked out of The Gap I started to look at the different offers each store had.  Some offered 20% off coupons, others would donate to a specific charitable cause with a certain purchase.  I was intrigued as I’m not a big shopper and if I can find a deal it makes me more likely to purchase.  I used to be an impulse buyer but in recent years have overcome that habit.

So in a single campaign The Gap not only redeemed itself but they also were able to make more Facebook users aware of how location based services (LBS) can provide value beyond checking in.  I have tried several of the LBS and only found a few that provided value. For instance I like Yelp because it has reviews to gauge the quality of the retailer as well as will search nearby locations for food or nightlife as well as link to directions. Some other LBS allow companies to offer specials but sometimes that requires additional promotions either on social networks, advertising or traditional store signage.

When Facebook initially launched Places I thought it was very lacking of value.  All I could do was check in and there was not much value.  Now with the addition of real time specials and offers, Places has become a game changer.  Savvy retailers will flock to Facebook Places and an opportunity to put a special offer in front of a potential or returning customer in real time.  True that many social snobs, including myself, may snub Facebook and deplore their privacy issue, but we’re a small percentage of consumers.  The remaining 80-90% of users don’t care and will continue to use Facebook as their primary social network.  And now checking in on Facebook provides value by offering immediate financial savings. LBS service providers no doubt took note of this past weekends activities and are trying to figure out how to compete against the world’s largest social network.

An interesting statistic will be what the uptick in Gap’s sales were from the campaign. I would also be interested in other retailers seeing sales surge from Facebook places.

There have been some great posts on this campaign from local bloggers that I enjoyed reading that you should review: