I watched the roll out of the new Twitter Lists feature last week with some anticipation. With the growth of Twitter there’s a lot of clutter to cut through and Lists offer a great way to do that. At the same time there has been some ho-hum reaction to what has been needed for some time, an ability to group and filter content on the Twitter web interface. So I thought I would tackle 10 questions I’ve had either asked of me by friends or have asked myself in the past week. With the help of the lazy web and my own testing here are my 10 Twitter Lists Questions and Answers. 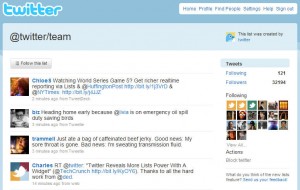 Twitter Lists are a new feature that allow users to create a named list of user accounts. Call it grouping or filtering it’s basically a subset of who you are following. Lists can be either public or private with private lists being only available for viewing by the List owner.

At this point the answer is no. Lists are designed at this point to receive and not transmit information.  But Twitter has a new division call TLISTS for Twitter Lists that will “enable media companies to curate the real-time web.  Stay tuned at tlists.com.

7.  Will apps like TweetDeck and HootSuite add Lists to their interface?

TweetDeck has Groups that works the same as Lists. I’ve used TweetDeck groups to filter my Twitter stream around subjects like News, Sports and Local Tweeps. Will have to wait and see how other Twitter clients and applications adopt Lists but it should be in upcoming releases.

8.  Will being listed increase authority?

I think it’s plausible to say that at some point yes, Lists will add to authority. In the same way that having 25,000+ followers gives a user some perceived authortity, having 15,000+ on a List would have the same authority. For users being listed shows a level of interest above following in the sense that the account is elevated to a more precise level.

As I’m writing this post my wife is reading Tweets to me on her iPhone and answers this question. Twitter has created a widget that allows you to display a Lists on your blog or web site. Create your widget at: .

Probably not, personal recommendation from someone you trusts is stronger than listings.

I hope I answered some of your questions about Twitter Lists and tried not to be just another post on this topic. I personally think that Twitter Lists give a great tool to bloggers, web site designers, marketing and communication professionals to aggregate information for specific content around events, topics, or anything you want. Thanks to my wife Maura (@mcdezigns) for her timely input and there is some great info out on Mashable, Twitter Blog and TechCrunch on using Twitter Lists.

What do you think of Twitter Lists? Have you created one? Are you following any? Are you Listed?